Art trail with heart is headed for Geelong!

Art trail with heart is headed for Geelong! 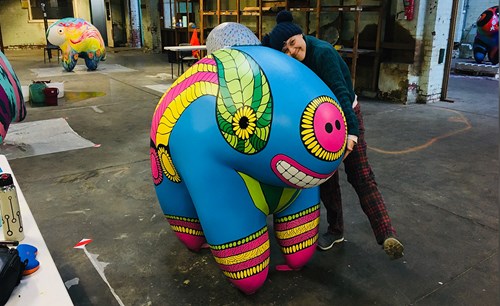 This year The Royal Children’s Hospital (RCH) marks its 150th anniversary, recognising the extraordinary impact that 150 years of great care has had on the children of Victoria, Australia and beyond.

To mark this major milestone, the RCH Foundation, supported by Wild in Art, will bring colour and creativity to the streets of Melbourne and Geelong with a spectacular public art trail early in 2021.

One hundred UooUoo (pronounced you-you) sculptures have been individually designed by Victorian artists and will find homes in laneways, streets, parks and public spaces, forming walking trails throughout Melbourne and Geelong.

Adventure Park is super proud to be a sponsor of a UooUoo called UooLoola who was designed by Melbourne artist Ilanit Gros.

Ilanit Gros is a Melbourne based artist who loves to draw and create art in public places. She gets inspired by people, places, animals, objects and events that connects to her life experiences and childhood memories. She translates her inspiration into artworks using images from her surroundings.

UooLoola is a special sculpture who loves to spend her time outdoors playing games with her family and friends and connecting to her land. She is a natural superhero and can do anything she puts her mind to. She loves flying under the sun and spreads her wings above the trees, and she’s headed to a bayside location in Geelong this January!

Anyone can visit UooLoola and the other amazing sculptures on display as part of Me and UooUoo: The RCH150 Anniversary Art Trail from January 2021 until 21 March 2021.  Find UooLoola located at the Carousel near Cumberland Pier in Geelong.

Visit www.uoouoo.org.au to start your journey and unlock awesome rewards along the trail.

When the art trail finishes, the sculptures will then be auctioned to raise funds for The Royal Children’s Hospital to support the future of paediatric healthcare.

< Back to News Headlines